ANZ today announced an audited[1] Statutory Profit after tax for the full year ended 30 September 2022 of $7,119 million, up 16% on the previous year.

Cash Profit[2] from continuing operations was $6,515 million, up 5% when compared with the prior year.

ANZ’s Common Equity Tier 1 Ratio was strong at 12.3% and Cash Return on Equity was 10.4%. The proposed Final Dividend is 74 cents per share, fully franked. 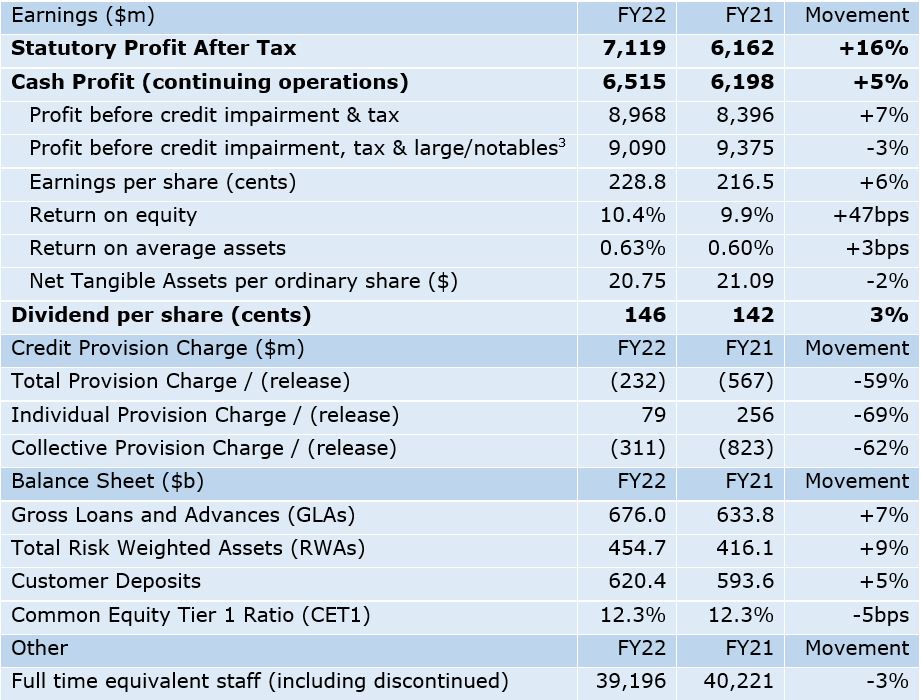 Restored momentum in Australian home loans with application approval times back in line with peers.

Continued de-risking of the Group with the sale of its margin lending business, formal separation of Wealth business and exiting of Financial Planning and Advice.

ANZ Plus in market with deposits growing at a faster rate than any other new digital bank in Australia; fully digital home loan product expected to pilot next month.

ANZ Chief Executive Officer Shayne Elliott said: “This was a strong financial result with all divisions making a material contribution and demonstrating the benefits of a diversified portfolio.

“We restored momentum in Australian home loans with application approval times back in line with industry peers. We continued the re-platforming of Australia Retail onto ANZ Plus, which is our new digital bank, with deposits already exceeding $1.2 billion and growing at a rate faster than any new digital bank in Australia.

“We will begin piloting a digital home loan with staff in the coming weeks. This will see the introduction of a fully automated digital home loan, initially focused on the re-finance market, later in 2023.

“In New Zealand, we maintained an industry leading position across our key segments while also reaching the final stages of the BS11. This was one of the largest compliance programs implemented in New Zealand banking history with the business now well positioned to focus on the future and further build the franchise.

“Institutional remains a well-managed and lower risk business. The expansion of our platforms strategy, where we lead the market in providing banking services for other financial institutions, resulted in the volume of payments processed using ANZ’s infrastructure growing by 85%. We also continued to innovate in our approach to digital assets, executing the first ever Australian-bank issued Australian dollar stablecoin.

“Australia Commercial delivered a solid first-up result as a stand-alone division and is already benefiting from increased focus and a refreshed strategy. A highlight was the commencement of the ANZ Worldline partnership that will allow us to provide business customers with world-leading, point-of-sale and online payment technology.

“We continued the systematic de-risking of the bank, highlighted by the sale of our margin lending business to Bendigo & Adelaide bank and just last month we completed the formal separation of our Wealth business to Insignia and Zurich.

“Combined with the exit of Financial Planning & Advice, as well as the associated remediation being at the very final stage, we are the only major bank in Australia to have removed the risks associated with wealth management for shareholders.

“Given the progress we have made in strengthening our core business, we were able to agree the acquisition of Suncorp Bank which will provide an important platform for growth, particularly in the fast-growing and rapidly diversifying Queensland economy.

“Suncorp Bank is a well-run business that will see more than one million new retail customers join ANZ, sharing in the benefits of a wider range of products and services. It also means the Suncorp Group is able to focus on its core mission of being the best insurance company in Australia and New Zealand.

“The acquisition, which is subject to government and regulatory approvals, will be partially funded by the successful $3.5 billion equity capital raising. This was the world’s largest equity raise this calendar year for an M&A transaction and was structured in a way to ensure all shareholders were treated equally,” Mr Elliott said.

The total credit provision result for the full year on a cash continuing basis was a net release of $232 million comprising:

The majority of these changes in provisions occurred during the first half. In the second half, there was a CP charge of $60 million and an IP release of $8 million, leading to a net credit impairment charge of $52 million.

While the overlay for COVID-19 risks is no longer required, it was prudent to introduce an allowance for increased risks associated with inflation and interest rates rising globally as well as increased geopolitical tensions. As a result, our CP balance at 30 September 2022 was $3,853 million.

The Group’s Common Equity Tier 1 Ratio of 12.3%[7], remains above the Australian Prudential Regulation Authority’s ‘Unquestionably Strong’ benchmark and is well placed to meet the requirements from the APRA Capital Reforms from January 2023.

The Board considers that a Final Dividend of 74 cents per share is appropriate and is consistent with its stated target Dividend Payout Ratio of between 60% and 65% (cash continuing, ex large/notable basis).

This is in line with statements made during the recent equity raising and applies to new ANZ shares issued as part of that process.

ANZ also stated the Dividend Reinvestment Plan will continue to apply for the Final 2022 Dividend at no discount and will be satisfied with a new share issuance.

Mr Elliott said: “The world is in a period of significant uncertainty with central banks struggling to control inflation. Geopolitical uncertainty, most notably the war in Ukraine, also continues to weigh heavily.

“Fortunately, RBA data show aggregate household balance sheets, net of liquid assets, are the best they have been for 15 years.

This is largely a result of customers taking cautious measures during COVID and the effective response from all levels of Government in Australia and New Zealand.

“While this data suggests on average people are still doing well, cost-of-living pressures are starting to have a meaningful impact and the next six months will be testing. This is particularly an issue for first-time homeowners who are only starting to build up their equity as well as those with less stable employment.

“This is why we have kept in place the additional hardship resources we invested in during the pandemic in Australia. In fact, we are applying the lessons learnt during COVID to identify customers who require extra support.

“There is uncertainty ahead, however we have the business in good shape to withstand volatility. We also have a highly engaged workforce with a high-performance culture and I’m confident in our ability to continue to deliver for customers and shareholders,” Mr Elliott said.

Interviews with relevant executives, including Shayne Elliott, can be found at bluenotes.anz.com.

[3]    Large/notables are items within Cash Profit that, given their nature and significance, are presented separately to provide transparency and aid comparison. Large/notable items were -$154m after tax for the year.

[4]    All commentary is presented on a Cash Profit continuing basis excluding large/notable items with growth rates compared with the full year ended 30 September 2021 unless otherwise stated.

[7] ~11.1% pro-forma accounting for the impact of the Suncorp Bank’s acquisition which is expected to complete in the second half of calendar year 2023.

BEHIND THE NUMBERS: Robust outlook as yesterday’s risks give way to tomorrow’s

BEHIND THE NUMBERS: Bracing Australia’s backbone

BEHIND THE NUMBERS: A new retail bank emerges